Marie Higgins is a best-selling, multi-published author of Christian and sweet romance novels; from refined bad-boy heroes who make your heart melt to the feisty heroines who somehow manage to love them regardless of their faults. She’s been with a Christian publisher since 2010. Between those and her others, she’s published over 40 heartwarming, on-the-edge-of-your-seat stories and broadened her readership by writing mystery/suspense, humor, time-travel, paranormal, along with her love for historical romances. Her readers have dubbed her "Queen of Tease", because of all her twists and turns and unexpected endings.

“During the chaotic years when Napoleon Bonaparte’s spies were everywhere, who can one trust…especially with their heart? The Heroic Rogue Series takes the reader into the Regency era and focuses on the heroes who will do anything to save their country from being taken over by the emperor of France, but most importantly, those men who are willing to risk their lives for the women they love.”

Welcome to my blog. Where did you get your inspiration for The Heroic Rogue Series?

I honestly wish I could pinpoint this answer for you. I had originally written this story many years ago. This was one of my first major historical novels, and I recall doing a lot of research on it, because of the Colonial Era. What I think gave me inspiration for this story was the movie “The Patriot”. I was a huge Mel Gibson fan, and I was intrigued by this plot. But of course, there wasn’t enough romance in the movie, in my opinion.

Now…several years later—two months ago, in fact—I had an editor from a major publishing company tell me that Colonial romances don’t sell…but Regency romances do. So my mind went to work on how I could revise this series. It only took one day to figure out how I could accomplish this, and one week later I had all four books revised.

Please give us a description of book one: Pretending You're Mine.

Mercedes Maxwell is devastated when her twin sister is driven to take her own life by none other than her husband, William Braxton. Determined to make her brother-in-law pay for the injustice, Mercedes travels to Dorchester, England to find him. She is shocked to find that William is unaware of his wife's death, and when Mercedes is mistaken for her sister, she decides to pose as her twin to glean some answers. Mercedes embarks on an adventure she never dreamed of in hopes of bringing justice to her sister. Instead of justice, Mercedes uncovers a plethora of secrets and mystery. As she works to unravel the mystery and discovers who she can trust, Mercedes finds that all is not as it seems, and that William Braxton may be the one man she can trust. 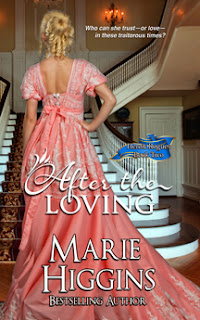 Now tell us about book two: After the Loving.

Marcus Thorne wears several masks in his life—playing retired pirate, Captain Hawk, is his favorite, but if his secret is discovered, he could die. Captivated by his enemy’s daughter, Marcus kidnaps her, but in turn, she captures his heart…until he discovers Isabelle is one of Napoleon’s spies with the power to endanger his life and the lives of his friends.

After her release, Isabelle can’t stop thinking about her masked abductor and how he’d stolen her heart before ridding her of his presence. Betrothed to a man who strangely reminds her of the man whose kisses set her ablaze, she marries him, only to discover he’s not who he seemed to be and is withholding secrets. But then…so is she. 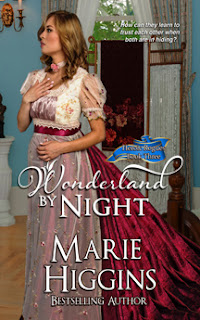 Wonderland by Night is the third book. What is it about?

Lady Sarah Emiline Lucia needs to hide her identity for fear that mobs will kill her and her family after her uncle—Napoleon Bonaparte—is exiled to Melba. She is sent to Hampshire, England to stay with friends of her father. To stay safe, she must play the role of her maid, while her maid assumes Lady Sarah’s identity. Complications arise when she meets a very handsome man, and she suddenly wants him to look at her as a real woman, not a servant. Protecting her life, however, is more important than confessing the truth.

Gabriel Lawrence’s pirate ship is almost captured and this time it was too close. He and his crew need to hide for a few months in hopes that Napoleon’s men who seek revenge, will soon forget about him.  During his stay at his aunt and uncle’s in Hampshire, he meets the niece of his enemy. Because she doesn’t know who Gabe is, he will become close to her to see if she knows any more of her uncle’s secrets. But the beauty of her companion, Miss Emmie, captures his attention, and her quirky personality keeps him wanting more. But her over-zealous nature for adventure places both of them in danger and he’s forced to play the honorable rogue.

How can he protect them both when an unknown spy is always one step ahead…and wants Gabe dead? 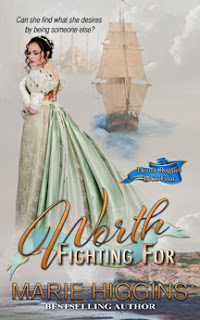 The last book in this series is Worth Fighting For. Tell us about it.

Lindsay Lennox, daughter of the governor of Turkey, worries she’ll never have the chance to meet a man and fall in love. Being the youngest of eight daughters, it is customary for all of her sisters to marry before she can be out in society and even meet a man. Her twenty-fourth birthday is coming quickly, and she’s running out of hope. Desperation takes hold and she disguises herself as a servant in order to slip through the palace gates. Disaster strikes when she meets a handsome sea captain and is mistakenly whisked across the sea to England. Lindsay knows her only hope of salvation will be to find her Whitton relatives in England and beg for help. Unfortunately, the devastating Captain Braxton proves more temptation than her lonely heart can resist.

Where is your website and blog so my readers can check out your recent and past books that you have written?

Thank you for this interview, Marie. I had one follower ask me when I would be having you on my blog again. I’m so glad that you wanted to come back. I hope my readers will check out your books.
Posted by Linda Weaver Clarke at 12:00 AM 7 comments: