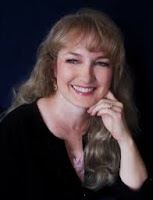 Donna Hatch, author of the best-selling “Rogue Hearts Series,” has won writing awards such as The Golden Quill and the International Digital Award. A hopeless romantic and adventurer at heart, she discovered her writing passion at the tender age of eight and has been listening to those voices ever since. She is a sought-after workshop presenter, and juggles freelance editing, multiple volunteer positions, and most of all, her six children. A native of Arizona who recently transplanted to the Pacific Northwest, she and her husband of over twenty five years are living proof that there really is a happily ever after. 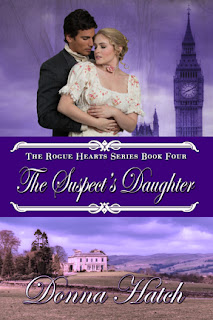 Welcome back to my blog, Donna. This is the synopsis of your new Regency Romance: The Suspect’s Daughter.

Determined to help her father with his political career, Jocelyn sets aside dreams of love until she meets a mysterious gentleman with dangerous secrets. Working undercover, Grant’s only suspect for a murder conspiracy is the father of a lady who is getting increasingly hard to ignore. They must work together to find the assassins. England’s future hangs in the balance...and so does their love.

Where did you get your inspiration for this story?

The murder plot in The Suspect’s Daughter was inspired by a true event in England known as the Cato Street Conspiracy, which thankfully, was averted largely in part due to an undercover Bow Street Runner whose name I never learned. This event happened in 1820, the same year my book takes place, and though my conspiracy varied considerably from the true events, there is a similar basic plot.

What kind of research did you do for this book?

I’ve been researching the Regency since 2002 when I first decided this was going to be my specialty so I can weave in details about customs, fashion, the political climate and current events into my books. For this book specifically, I researched the Cato Street Conspiracy from many different sources, as well as Parliament and how a new prime minister was chosen. I also studied maps and travel guides to understand the layout of London so I can add little details to make the readers feel as if they are there. In addition, I inadvertently researched concussions when my husband got one, and Post Traumatic Stress Syndrome through his friend who’d recently returned home from serving in the armed forces in the Middle East.

Please tell us about one of the main characters in this story and what you like about him or her.

Though Grant Amesbury is a cynic and a loner, his brothers always turned to him when they needed help. Grant would be the last one to classify himself as a dark knight, but he thrives on chasing down villains and dragging them to justice--dead or alive. Intriguing and enigmatic, Grant has captivated readers since the first book in the series, The Stranger She Married, hit bookstores. And each time he appeared in subsequent books, The Guise of a Gentleman, and A Perfect Secret, his fan base grew as did requests for his very own story.

I have been planning to finish his story in time for an autumn release date, but my daughter got married and then our family moved out of state. All of these events took me away from writing. But I was determined to release the book this year—I felt I owed that to my fans. So I pushed and pushed and managed to get it finished in time for a December release date—sort of a Christmas present to my fans who’ve been begging for Grant’s story.

I, too, liked Grant when I read The Stranger She Married, so I’m glad that you have made him a main character in this story. Where can my readers find you online?

Thank you, Donna, for this wonderful interview. I hope my followers will grab a copy and read it. Your regency romances are not only intriguing but very clean. A BIG PLUS! 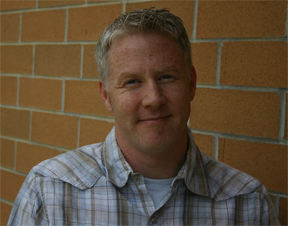 Dave Arnold is a pastor, author, speaker, life coach and adjunct professor at a college. Dave is married to Angie and they have two children, Luke (5 years old) and Angelina (20 months; a little over a year-and-a-half). Dave has written three books and is working on two more.

Welcome to my blog, Dave. Please tell us about your book: It’s Possible.

It’s Possible is a short, action-packed book that will help you learn to thrive. So many people just settle in life: they live for the weekends, that next vacation, etc. But God has created us with a purpose and a unique set of passions. We are here for a reason and to make a difference in the world. Throughout this book, I use inspiring stories and give practical tips on how to take steps towards thriving. Of course, thriving is a life-long process; but I do believe it’s possible (hence the title) to take steps to becoming all that we are meant to become. 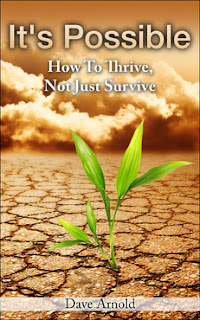 Wow! That is such an inspiring thought, that God has created us with a purpose and we have to find that purpose and take those steps to becoming what he wants us to be. Where did you get your inspiration for this book?

It’s Possible was written out of my own experience of when I was merely “surviving” in life. There was a time I was working so much that I barely had time to breathe and found myself discounted from my wife and from my faith in God. But thankfully, through a poignant conversation with my wife, I began to take steps to learn what it means to thrive.

What kind of research did you do?

My own study of the Bible was most prominent for the writing of this book. I also weave throughout many quotes from people throughout history. I am an avid reader, so much of my material comes from the books I read.

The study of the Bible is the best research a person can do, Dave. Now it’s time to tell us something about the real you that we’ll never forget.
Growing up I struggled a lot in school. I had a hard time keeping up. Because of this, I was told I had a learning disability and was forced to go to Resource, a special Ed class. I was humiliated. But it was during this time that my Resource teacher, a wonderful kind woman, recognized a gift in me – the gift of telling a story. And so, she encouraged me to write and use my imagination through words. She saw something in me that I didn’t see. All I saw was there was something wrong with me; she saw potential. “Love,” said Bono of the band U2, “is seeing potential in someone.” What a gift we can give others!

Thank you for sharing a part of yourself in this interview, Dave. Where can my readers find you online?

I hope my followers will check out this wonderful and inspiring book. I’m sure it will help you in your life.
Posted by Linda Weaver Clarke at 9:20 AM 12 comments: