The Alliance of Isian!

What is this romantic fantasy about? Read an awesome review below and find out.

“I am quickly becoming a huge fan of Serena's. I loved this book even more than the first one in the series. I am always intrigued by stories of arranged marriages and how they turn to marriages filled with love. These two characters had so much to overcome, coming from different cultures. Yet, they bravely took on the challenge because of the love they had for the people who they ruled over. There is plenty of action and intrigue in the storyline. I lost quite a bit of sleep reading way too late into the night. I love the characters. I want to know even more about their lives. I can't wait for the next book in the series!!!!!!” -- Cheryl Larson 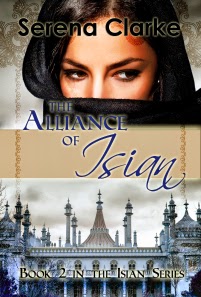 Book: The Alliance of Isain

Synopsis: War is coming and all the kingdoms must choose a side. Isian decides to make an alliance with their long time enemies in order to defeat a common enemy. So Isian sends a proposal, offering their daughter to the prince, in order to ensure an alliance. Princess Gabrielle and her new husband, Prince Alec must learn to work together and trust each other in order to triumph in the approaching war. With a mysterious beast attacking the kingdom, their lives in danger, and overcoming their vast cultural differences, will love grow despite their trails or tear them apart? Enjoy the fantasy, danger, mystery, and romance!

“The Alliance of Isian was one of the best fantasies I’ve read. This book was enchanting and very difficult to put down. Gabrielle is a strong character and I could feel her frustration in being forced to marry someone she did not know, and whose background was totally so different from her own. Alec is likewise a strong character and has his definite opinions, but he is also very sensitive to Gabrielle’s feelings of inadequacy in marrying a stranger. I noticed the change in both characters, a change for the better, as Gabrielle and Alec fall in love. I found myself wishing the story would never end.” –Linda Weaver Clarke

This book may be purchased at Amazon and Barnes and Noble. It is also available as an e-book for $2.99. Visit Serena’s website at http://serenaclarke.wordpress.com/about-author and learn more.