Rebecca was raised by her grandparents in Santa Barbara, California. As a teenager, she played basketball and performed as a flamenco dancer in parades and on stage for the Old Spanish Days Fiesta. She spent most of her time playing at the beach, collecting shells, and digging in the sand. She said, “One of my favorite memories is riding my pony along the shore with the surf spraying my feet. I still love the moist sea air.” She now lives in rural Colorado and is raising cows, horses, rabbits, goats, sheep, a llama named Tina, and ten children. Now that’s quite a list! She is the author of two novels and a children’s picture book.

“Grasshopper Pie is a humorous picture book about imagination and the dangers of taking ideas too literally. A mother dreams up and talks about unique dishes such as grasshopper pie to her children, yet her young boy and girl decide to surprise her with a pie that has not-so-imaginary ingredients! A funny story, nicely illustrated with simple yet charming color drawings, Grasshopper Pie is a welcome addition to school and community library and especially recommended for young readers ages 4 to 6.” –Midwest Book Review 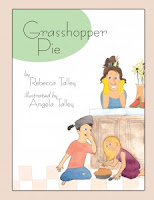 Hello Rebecca. I would like to know where you got your inspiration for Grasshopper Pie?

One day I was cleaning the bathroom and two of my younger kids wanted me to play a cooking game with them. I was intent on cleaning but agreed, half-heartedly, to play. What started as an imaginary game became all too real when they decided to find a real grasshopper to feed me for the grasshopper pie I requested. Fortunately, I was smarter than the mom in the book and I didn't actually eat it, but that's what sparked the idea for this book.

This sounds like a fun book to read to your children or grandchildren. In your new novel, Altared Plans, a reviewer wrote, “The dialogue was clever and I enjoyed the banter between the characters.” Tell us about your new book. 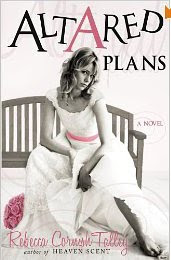 Altared Plans is about a young girl who's planned out her life and when it falls apart, so does she. She vows to never love another young man after her fiancée deserts her on her wedding day. She finally agrees to go back to college and against her wishes, meets another young man that first irritates her and then intrigues her. Through a series of mishaps, and an unintended fiancée, she learns that you can't plan love, it just is.

I love the book cover. Altared Plans sounds like a comedy. Where did you get your ideas? Do you ever use real life experiences in your books?

Yes, I would consider it a romantic comedy. Altared Plans is loosely based on the courtship with my husband. Of course, I fictionalized it, but some of the incidents, like meeting my future mother-in-law while I was dressed as a clown really happened. I'm still embarrassed about that. My husband also offered to feed me “Frank.” I thought maybe he was a mass-murderer who had killed a man named Frank, but it turned out Frank was one of his steers. He thought he was pretty funny. I included that in Altared Plans.

Raising 10 kids gives me plenty of material for my books so I use real-life experiences. In my upcoming January 2011 release, The Upside of Down, I use many experiences because the story is about a woman raising a large family. One such incident is when the main character begins unloading the dryer only to find that one of her kids had a crayon in his pocket and the entire wash load is stained with crayon. The main character also has to deal with an anti-Mormon mother and I based that on my experience with my grandfather who raised me.

I love learning about how an author uses real life experiences in her books. It’s fun to know. What does your family think about your writing?

I'm very blessed that my family supports me and they like to brag about my books. My daughter even started a group on Facebook about me.

Now that’s what I call real support! Tell us something about the real you that we’ll never forget.

The real me? Hmmm . . . In college, at the end of my sophomore year I was awarded "The Biggest Flirt" in my church ward. I still say it was rigged.

Rigged? Hey, Rebecca, this bit of info may not be true, but it sure is fun to imagine! I wonder what your husband has to say about it?
Posted by Linda Weaver Clarke at 9:06 AM

I would love to read "Altared Plans" -I am definitely the sort of person who likes to have a plan set in mind, and having it changed can really throw me for a loop. I really like seeing authors take snippets of real life and working it into their fiction, since I do that frequently in my own writing -it's nice to know that I'm not alone in that! :)
baileythebookworm[at]gmail.com

I my heart loves children's books. I'd love grasshopper pie. sounds cute. thanks

I would love to read both of those and her upcoming book. She sounds like a delightful author! Hmmm... somewhere in Colorado? How fun... Maybe I will run into her somewhere!

The grasshopper pie sounds like a great children's book. It would be a great addition to my classroom library. Thanks for the great giveaway.

I love that you get your ideas for your books from your real life. Most of our lives are pretty mundane, like cleaning the bathroom, and if we blink we miss the funny parts so thanks for showing this mom intent on getting the mundane done to keep an eye out for the fun. I can't wait to read either book.

Thanks for the giveaway, both books look cute-who doesn't love a romantic comedy. It's interesting to see an author venture into two such different genres. I wonder what she enjoys writing more (childrens or YA, romantic comedy) and what is more difficult to write.
hmhenderson@yahoo.com

I've read "Altared Plans" more than once and love it every time!! "Grasshopper Pie" sounds like a wonderful children's book to read with my children!

me and you plus two said...

grasshopper pie sounds hilarious! My five year old would love it. We bake together quite a bit.
I am always looking for a new good book to read too, so I may have to give "altered plans," a look :)

Knowing all of the Talleys personally, I can see Brother Talley finding the "Frank" thing extremely hilarious! As well as her children feeding her a real grasshopper, which Brother Talley found probably just as hiliarious! They are an amazing family and I love all of Sister Talley's writing!

You didn't need to tell us that you were "The Biggest Flirt". We already knew. LOL Just you wait till the award goes up on the church bulletin board. Hahaha I love your writing. With all the grasshoppers we have endured over the past three years, it would be good to do something with them besides stepping on them.

How awesome that her daughter started a facebook group! I would love to win these books.
bkhabelATgmailDOTcom

I'd love to read Altared Plans and Grasshopper Pie sounds perfect for our grandkids. I'll be looking for it!

As a book club leader I love to find new material for our group. "Altered Plans" sounds very interesting. While reading your description I started thinking of all my altered plans...so glad that God in his wisdom altered so many of my plans!

As a granny I'm going to have to keep my eyes open for "Grasshopper Pie" sounds very cute!

thanks for the opportunity to read 'altered plans'...sounds like a book of inspiration :)

I'd love to read Grasshopper Pie with my daughter, and Altared Plans looks like a fun book for me!

We posted about this giveaway at Winning Readings: http://winningreadings.blogspot.com/2010/09/grasshopper-pie.html

Please include me.
Thanks for the chance to win.

Yes, Tina was named after the llama in Napoleon Dynamite--now we have a miniature donkey named Starla.

Wow, thank you so much for the interview and to all of you who have entered the contest.

Grasshopper Pie sounds like such a fun book. My son would love to hear it.
wmmahaney(at)att(dot)net

(I had a typo in my last post). I used www.random.org to choose a winner. I'm happy to announce that Mutti won. Congrats! Thanks to everyone who participated!