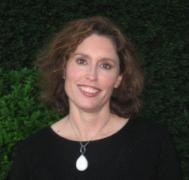 Originally from Arizona, Traci Hunter Abramson has spent most of her adult life living in Virginia. She is a graduate of Brigham Young University and a former employee of the Central Intelligence Agency. Since leaving the CIA, Traci has written several novels, including the Undercurrents trilogy, Royal Target, Obsession, and the Saint Squad series. When she’s not writing, Traci enjoys spending time with her husband and four children. She also enjoys coaching the local high school swim team.

Hello, Traci! Please tell us about your novel.

Royal Secrets is a fun romantic suspense about a woman struggling to raise her two young sons after losing her husband. When she comes to work for the royal family of Meridia, she forms an unlikely friendship with Prince Stefano. As time passes, and their friendship blossoms into romance, outside forces threaten the royal family and the very fabric of life in this storybook country.

Where did you get your inspiration for this book?

Royal Secrets was a unique project for me because it was written as in response to fan mail. I wrote Royal Target several years ago assuming that it would be a stand alone novel, but shortly after it came out, I started receiving fan mail from readers asking if I was going to write a sequel.

I tried a few times to start a sequel, but other stories kept dominating my thoughts and demanded to get written first. Then, finally, I started writing what was supposed to be a sequel. To my surprise, two secondary characters, Prince Stefano of Meridia and Alora DeSanto, completely hijacked this novel. Although I fought with them for several chapters, I finally gave up and let them find their story.

What kind of research did you have to do for this novel?

Most of my research for this novel occurred by simply pulling Royal Target off of my bookshelf. Both novels occurred primarily in the same locations, so I was able to borrow from some of the research I had previously done on those types of details. As for the intelligence and government side of the story, I was able to rely on my previous background working for the CIA.

That’s amazing. What does your family think about your writing?

Overall, my family has been very supportive and tolerant of my writing. I know it can be difficult at times, especially when I’m in the middle of the project, but usually they’re pretty good about letting me know when my balance needs to shift a bit between my writing time and our family time.

Thanks for the fun interview. I’ve never interviewed a former CIA agent before. Hahaha. Now it’s time to tell us something about the real you that we’ll never forget.

Between my junior and senior years in high school, I lived in Venezuela as a foreign exchange student. I had always wanted to become more fluent in Spanish and thought this would be a great experience. I lived in Caracas during the time of year when young people were required to register for the draft, and my friends and I were pulled over somewhat frequently. Twice I was caught without my passport. Both times the authorities discussed deporting me…once to Colombia and the other time to Brazil. Apparently my accent was good enough that they thought I was a native speaker even though my vocabulary was lacking. After some heated conversations in which I countered their questions in Spanish with some rather heated English (and after my friend who often held my passport arrived) they decided I wasn’t worth the paperwork and I was allowed to stay.

Wow! That’s scary. It sounds like you have had some interesting experiences. Almost deported in a foreign country, going on dangerous assignments for the CIA, and now you’re an author! You’ve had a very interesting life, Traci!
Posted by Linda Weaver Clarke at 1:00 AM

thanks for the chance to read this fabulous story.

Sounds like a great story! Thanks for the giveaway!

I love Traci's books! I have read every one I could get my hands on! Keep up the great work, Traci!
katsaddress AT gmail. DOT com

I have been wanting to try a book by Traci Hunter Abramson. I have heard great things from my friends on goodreads. Imagine a CIA agent that has become an author. How interesting. I din't know her background before reading this interview. Thanks!

Fascinating life history! I haven't read any books yet by Traci; sounds like I'll have to though. charstastny(at)gmail(dot)com

Royal Secrets sounds like an interesting book. With your experience in the CIA and other adventures, you certainly have a rich background to draw from.
Congratulations!
We share an interest in swimming. I'm not a coach. I swim laps three times a week though.

I just read Traci's newest book Code Word. I LOVED IT! I haven't read her royal books yet. They sound fun.

I love Traci and her books. holtmin at yahoo dot com

Cool interview! I need to get my hands on this book! Oooh I should introduce your books to my book club! :)

I love Traci's books!! Hope there's another Royal book in the near future, they are that good!!!!

I love Traci Hunter Abramson books. I've read them all several times. I loved Royal Secrets and love these characters. I would love to have a book written about the weddings of the two couples. I'd also love a sequel to Code Word. I really enjoy the Saint Squad/Whitmore family characters. An autographed Royal Secrets book would be treasured!

I would love to receive Traci's book. We knew each other when I lived in VA for awhile--she was writing her first book then.

I would love to win/read this book. It sounds terrific.

Please enter me for a chance.

I was intrigued when I read that she coaches at the local high school--awesome!
ruthaw_1974@yahoo.com

Royal Secrets sounds like a great read! Thanks for the chance to win it! cheryllynne(at)rocketmail(dot)com

Its good to know I'm not the only author who's characters take over books!
Looks fantastic!
quietwriter@ymail.com

A former CIA agent? For real? Wow! This sounds like an intriguing book. The storyline pulled me in.

Congratulations, Cheryl Larson! You are the winner of this awesome book. I know you'll enjoy it.