Kathi Oram Peterson is the mother of three, grandmother of two, and wife of one. After her youngest child graduated high school, she went back to college and earned her BA in English. She worked for a curriculum publisher writing and editing children’s biography and concept books, but always had the dream of writing YA time travel and romantic suspense novels. Her dream finally came true with the publication of The Forgotten Warrior, followed by An Angel on Main Street, The Stone Traveler, River Whispers, Cold Justice, and Wanted.

Welcome back to my blog, Kathi. I love romantic suspense. Please tell us about your new book, Wanted. 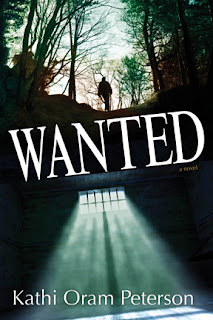 This was an exciting story to write. I set it in my home state of Idaho in areas I’m very familiar with: Swan Valley, Table Rock Mountain, and Fall Creek Falls. Let me share the back cover blurb of the book.

Rodeo veterinarian Jo Powers is accustomed to operating under pressure—but nothing could have prepared her for the shocking discovery of the armed and bleeding escaped convict hiding in her truck. Even more disconcerting is the fact that Jo knows the man in the prison jumpsuit. Jo’s split-second decision to use her medical skill to save this man’s life is just the beginning because now he needs her help to uncover the truth.

Seven years ago, Branson Faulkner was accused of a murder he claims he didn’t commit. With the hope of finding new evidence to prove his innocence, he’s risked everything to clear his name and reclaim his life—but he can’t do it alone. Jo agrees to help, even though she isn’t completely sure Faulkner is innocent. Now as Faulkner and Jo conduct their investigation, they discover an alarming connection between a string of homicides, and one truth is clear: there’s a murderer on the loose who will stop at nothing to cover his tracks . . .

I love mysteries that include romance. It seems to keep the story moving. Where did you get your inspiration for this novel?

Sometimes the idea of a story just hits you out of the blue and sometimes it is an accumulation of things: places you’ve been, people you’ve known, and the type of story you’ve written before. Those three things, plus a lot of work inspired Wanted. I needed the main character to love animals, so making Jo a veterinarian was a good fit. And I’ve always liked the idea of having the hero wounded from a bullet and in need of help. Making Branson an escaped prisoner worked perfectly.

It’s fun finding out what inspires an author. What kind of research did you do for this book?

I attended many rodeos to research this novel. In fact, I was allowed, by one rodeo owner, a “behind the scenes” view of what goes on during a rodeo. I learned how they truly cared for their stock and many times took better care of their animals then they did themselves. These rodeos were not in air-conditioned arenas. They were held in the middle of nowhere, but when rodeo time arrived people gathered from miles around bringing their campers and RVs with them.

I also spent a great deal of time researching the criminal justice system. A friend of mine helped to teach religion classes in the prison and many inmates were converted. Time behind bars would be an awful experience, but it could also help some prisoners commit to living better lives. My friend was a great resource.

And because I grew-up close to where I set the novel I knew a great deal about the area. See, I knew that there really is a cave behind Fall Creek Falls because I’ve been there. I knew the creek was a warm springs because I’ve floated down it. I knew the beauty of Table Rock Mountain because my mother had been born at the base of the mountain and had taken me there many times as I was growing up.

Wow! I love it. Your research and knowledge makes reading your books fun. What is the biggest challenge in writing a romantic suspense story?

I think the most challenging aspect of writing romantic suspense is adding enough red-herrings. Are two enough, are six too many? But this usually resolves itself as the story unfolds and opportunities arise.

Thanks, Kathi, for this awesome interview. It was fun learning more about your book and your research.
Posted by Linda Weaver Clarke at 1:00 AM

My Mom and I would Love to read your book! I love the concept and am anxious to read it. I wonder how I'll feel about Branson and whether I'll feel he's innocent when he meets Jo. I'd love to read along and learn how Jo comes to trust Branson and How they find a way to track the real killer down.

I LOVE animals! My Mom does too. It was awesome to know how those rodeo animals were treated. Since I really care about animals and didn't grow up around Rodeo's I always thought it was cruel. I'm so happy you got to see Behind the scenes and now know how much the riders care for them. That means a lot to me. I'd love to win your book! I'm going to Amazon next to check out your other books. I'm placing a order today for some books for my Mom for Mother's Day. Your book would be a great addition.

The Blurb was wonderful! It really has me drawn in and already starting to care for these to Characters.

Thanks for offering a free book!

Thanks for the fun interview, Linda. Wanted should be in stores this week. I just barely received my author copies. :)

What an interesting interview. Your book sounds so good with intriguing characterrs,mystery and suspense.
Congratulations!

Great interview, Linda and Kathi. I've seen many early drafts, it's exciting to see your beautiful book in its entirety!

I hope there's a lot of support for Kathi's writing. She manages to write exciting, interesting, CLEAN yet still romantic novels with interesting twists along the way!

I enjoyed reading the interview and getting to know a little bit about Kathi.
I'm looking forward to reading the book also.
Thanks for the giveaway.
Janet E.
von1janet(at)gmail(dot)com

I loved River Whispers. I can't wait to read Wanted. I would love to win it, but if not, I'll end up buying a copy. Thanks so much for the interview and for a chance to win a copy of the book.
jarchibald@graniteschools.org

Romantic suspense is one of my favorite genres. I have to say my very favorite romantic suspense novel is "Dream Man" by Linda Howard. With all the tension from the murder investigations and then the cop falling in love with the psychic, it makes it very hard to put down!
Thanks for the giveaway!
mestith at gmail dot com

I would love to read this book, sounds like a page turner from the very beginning.

Thanks for the giveaway!

I love Kathi's books, and love that Linda does these interviews and giveaways. I'd love to do a review of Wanted on my blog. Check out the blog, and if you aren't already a follower, please join. www.thereadingandhobbycorner.blogspot.com

I'd love to win this book to add to my fantastic book collection. leeben1990@gmail.com

great interview and synopsis of Kathi's book, "Wanted" which makes me really want to read "Wanted"
Thank you.

This book sounds great. I know I'll enjoy reading it. I love suspense and romance is fun, too.

Kathi, your comment regarding red herrings totally struck a chord with me!! For years, I wanted to write mysteries since this was my favorite genre. However, trying to provide red herrings and suitable clues scared me immensely, lol. So I never put pen to paper!!

I love romantic/suspense novels and would enjoy reading and reviewing this book for you.

Sounds completely intriguing. I hope I win this book. I haven't heard of this author before. Sounds promising.

Great interview! I found it interesting that Kathi went to rodeo's for research. I enjoy rodeos.