Sharon Srock lives with her husband, Larry, and two dogs in Rural Oklahoma. She is a mother, grandmother, and Sunday School teacher. Sharon has one and three-quarters jobs and writes in her spare time. Her favorite hobby is traveling with her grandchildren. Sharon has two novels in The Women of Valley View series: Callie released in October 2012, and Terri released in April 2013.

“Terri is a delightful story, the second book in Women of Valley View. The humor is great and the author had me bursting into laughter several times. The romance is delectable and I found myself sighing and rereading the sweet romance scenes between Terri and Steve.” –Review by Author Linda Weaver Clarke

Hello, Sharon. Welcome to my blog. Please tell us about your new novel. 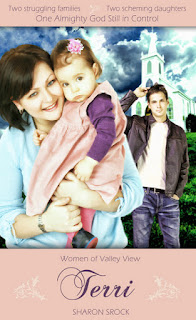 Despite a bustling day care center and a new foster child, Terri Hayes hungers for a family of her own. Then a plumbing mishap leaves her homeless and questioning God’s plan. Steve Evans’s gracious offer of his basement apartment as a temporary solution is an answered prayer.

Steve is a successful writer and a good father, but Terri is horrified when Steve’s book research leads him to a harsh confrontation with the parents of her foster child. She needs to distance herself from Steve, but her efforts fall short as his two scheming daughters plot to make Terri their new stepmother.

Will harsh words and sneaky plans drive Kelsey’s family further apart and put a wedge between Terri and Steve? Or does God have another plan in store?

Your story sounds very intriguing to me. Where did you get your inspiration for this book?

The character of Terri was born out of necessity for the first story. When that one story became a series, I really began to question God about the direction He was taking me. Terri’s journey mirrors mine in a lot of ways. Mostly the being dragged down an uncertain path kicking and screaming part.

Ha, ha! I love how you can identify with this character. What kind of research did you have to do for this novel?

Not a lot. I don’t like research, that’s why I write contemporary novels. I have friends who fostered 3 little girls, so I picked their brains and I talked with a social worker to get the story from their perspective.

Hey, talking to a social worker is great research. What does your family think about your writing?

They are all very supportive. Reading Mom’s books is a way to get my grown daughter’s to read. My husband won’t read, but he doesn’t mind fending for himself in the kitchen if I have to write.

If a husband can fend for himself without complaint, then that’s real support. Now it’s time to tell us something about the real you that we’ll never forget.

I’m a huge Star Trek fan, and I once got James Doohan, the actor who played Scotty in the original series, lost in down town Oklahoma City.

Hey! My mother was a huge Star Trek fan, too. She never missed a show. I think she had a crush on James Kirk. Back then William Shatner was quite good-looking. Thanks for this opportunity of getting to know you and your book.
Posted by Linda Weaver Clarke at 1:00 AM

Linda, thanks so much for hosting me this week. I look forward to visiting with your readers.

Sharon, I'm a huge Star Trek fan too. I fell in love with Mr. Spock when I was about 12. Your book and series sound interesting and I look forward to getting them either in this giveaway or by buying them myself. i work as a volunteer librarian in my church library and know these would be good additions to our library.
imabrassy1@yahoo.com

THANK YOU FOR THE GIVEAWAY! THIS BOOK SOUNDS VERY INTERESTING. IT SOUNDS LIKE ONE OF LIFES TRIALS AND TRIBULATIONS. HOPEFULLY I WILL WIN! GNHARRIS92@ GMAIL.COM

Thanks for the nice interview. Terri sounds like a book with lots of ups and downs that will pull at your heartstrings.
Congratulations!

I enjoyed the interview. I like her overcoming obsticals. We seem to have our share of them lately. Thanks for the chance to win this.

Connie, I posters of Spock all over my room at that age. Nice to meet a kindred spirit.

GNHARRIS92@ GMAIL.COM,
Thanks for stopping by. Good luck in the drawing.

Gail, Always good to see you. I'd say that I'm surprised that you haven't read the book, but we're writers, we don't get to read!

Nancy, I hope you get the chance to read both Women of Valley View books.

Great interview! I like the sound of Terri. I will have to get both of these books of The Women of Valley View. I thought that was great research by talking to the social worker. I'm a huge fan of Star Trek myself. I'n always like Mr. Spock and James Kirk.

Becky, I hope you enjoy both stories.

Humor? Romance? a touch of mystery? Count me in! thank you for the interesting interview and a chance to win her book!!!

Celita,
Thanks for your interest. I hope you enjoy the story!

I'm looking forward to sitting down and catching up on my reading this summer.
Thanks for entering me in the giveaway.
Janet E.
von1janet(at)gmail(dot)com

Janet, Read one for me will you? I think the thing I miss most is curling up with a good book.

I lost track of how many books I need to read, but this sounds like a winner!
ruthaw_1974@yahoo.com

Ruth, I hope you add both Women of Valley View books to your stack!