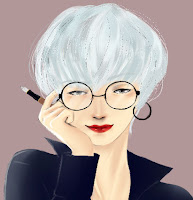 Miss Mae is all about G-rated romantic mysteries. “Said the Spider to the Fly”, “When the Bough Breaks”, “Dove Island”, “It’s Elementary, My Dear Winifred”, and “See No Evil, My Pretty Lady” are award winning stories. Her latest, “Catch Me If You Can”, and the SF novella “Through a Glass Darkly” have already received top rated five-star reviews.

On the flip side, Miss Mae is also about humor, creating that Pukelitzer Award winning official unofficial reporter, I.B. Nosey. You can find more about Nosey and the gang of ‘Mischaps of Gum Drop Island’ in the ‘Ahoy, Mischaps!’ series of books: Ahoy, Gum Drop!, Ahoy, Out There!, and the newest ‘Ahoy, Mummy Mia!’ Fun for the kids and the kids-at-heart. Nosey is located at http://feelingnoseyblogspot.com 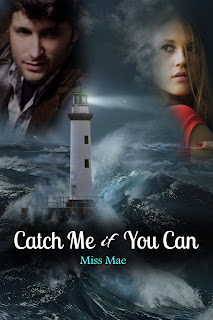 Welcome to my blog, Miss Mae. “Catch Me If You Can” has won the platinum for the 2017 Hermes Creative Awards. Congratulations! Where did you get your inspiration for this story?

My inspiration for this story came about because of my love of mysteries. (I’m a great Sherlock Holmes fan). I also love the intrigue of mastering puzzles, and I love escape games. In a sort of way, I combined all of that in this book. I’ve read a lot of Agatha Christie as well (who hasn’t watched her movies on TV?), so for my ensemble of characters, I followed Christie’s lead…have the people trapped together. That’s where my idea of a hurricane came in.

I love all the characters, of course. Each has their own unique personality. And I must say that the actors in the audio book were astounding at how they captured the characters’ quirks and feelings. J.W. Terry, who “plays” the obnoxious Bob took my breath away with how real he portrayed him; Stephen Mendel’s deep tones who plays Victor, the hero, made my heart go pitter-patter; Robin Riker who plays Lois, the heroine, sent shivers down my spine at how she knew exactly when to be soft and the next instant to be hard as nails (depending on the scene); Toni Attell, as Jenna the resort owner --ooh, she had “catty” to an art, and Dave Mallow as Andy was Nasty with a capital N.

Please tell us about this book.

Thank you, Linda, for having me at your blog. I’m thrilled to chat up about the audio version of my latest romantic mystery, “Catch Me If You Can”. Roger Rittner Productions of Los Angeles is the ‘man behind the curtain’ (as he describes himself) for this full-cast production. If I may, I’d like to use the press release that Roger wrote so that your readers have a better understanding of what went into this book:

The howling wind of a hurricane. The creak of footsteps on the stairs. The wailing of a dog in the dark of night. "Catch Me If You Can", the thrilling romantic mystery by award-winning author Miss Mae, is now available in an enhanced audiobook at PulpRadio.net.

"Catch Me If You Can" has received five-star reader ratings at Amazon.com, and the brand new audio version enhances the story with extensive sound effects, background accents, and a complete music score. The story is performed by five of Hollywood's best voice artists, and is produced by Roger Rittner Productions of Los Angeles.

In this riveting story, Lois Steinberg is washed ashore on a South Carolina island during a category four hurricane. She seeks shelter inside an old plantation house that was scheduled to host a video game convention to announce the newest mystery game, "Catch Me If You Can". But almost immediately, the cook is found murdered. Then the prize to be awarded at the convention, a CD of the game, goes missing. The quest to discover the answers becomes a maze more complicated than any "Catch Me" game could ever be devised, as Lois races to save her life ... and keep hidden her mysterious secret.

The new audiobook is available in a deluxe 6-CD set in library case, or as an instant MP3 download at PulpRadio.net.

Reviewers say:
"Love the pacing of the story. Catch Me If You Can has intriguing characters and more and more surprises in each chapter." Geeta M. Kakade.

"The emotion in the voices and the sound effects are great." Larry Hammersley.

"The sound effects ... absolutely make the story come alive, transporting the reader right in the midst of the story." C. Rogers.

About the Author:
Miss Mae is an award winning best selling author. "Said the Spider to the Fly" has received consistent five-star reviews and has won the renowned title of Best Book of the Week from The Long and the Short of It Reviews and The Romance Studio. With her writing style compared to Agatha Christie's after the release of her gothic thriller, "See No Evil, My Pretty Lady", she's gone on to pen "It's Elementary, My Dear Winifred" which was featured in the Top Ten Read at Myshelf.com in 2009.

About the Producer:
Roger Rittner is a producer of audiobooks, audio drama, and audio marketing and training. He created the cult radio adventure "The Adventures of Doc Savage", and "Bulldog Drummond - The Audio Adventure", which won the AVA Platinum Award for Audio and the Hermes Creative Award for audio drama. He created and produced The Variety Arts Radio Theatre live stage show, and co-created and directed "Charlie Sent Me!", the original musical comedy for radio, heard on National Public Radio.

About the Talent:
"Catch Me If You Can” is narrated by and stars Stephen Mendel, whose voice credits include radio and TV commercials, video games, and audiobooks. Robin Riker has starred in TV series for ABC, CBS, FOX, and Showtime, and films including the cult favorite film "Alligator". She is currently a regular on "General Hospital". J.W. Terry is an Emmy-winning TV actor whose voice credits include video games, anime, audiobooks, and cartoons. Toni Attell is an Emmy-nominated film and TV actress, as well as a respected acting coach and motivational speaker. Dave Mallow has been heard in commercials, film, radio plays, audiobooks, and numerous video games and cartoons.

Please tell my readers how they can get a discount on this audiobook from the producer and any pertinent information they should know.

I’ll provide the code in the comment section. EVERYONE who visits, for the entire MONTH, can use this code for the 40% discount on the instant download price. That way anyone, and everyone, who wants to “win”, can. (and I don’t have to choose just “one” person!) LOL

The wonderful thing about ordering straight from Roger’s site is that you don’t have to join anything, or become a member of, or sign up for anything (as opposed to Audible). You come over, put in the code, grab the download, and listen. That’s it!

Thanks so much for having me, Linda, and it’s wonderful to meet your readers. I hope they’ll tell their friends about this audio book!

Thank you for this interview, Miss Mae. I hope my followers will check the book and audiobook out. You can visit her website at www.themissmaesite.com/p/welcome-readers.html.

Posted by Linda Weaver Clarke at 12:00 AM

Thanks for spotlighting me today, and hello and welcome to all who visit today! Very nice to meet all of you. :)

Hello, Miss Mae and Linda! What a great interview. I can attest to the "talent" on this book. I felt like I was right in the room with all of the characters and wanted to join in on the conversations! This audio book will keep you on the edge of your seat!
JQ Rose

Congratulations on your award and all of your wonderful books!

This sounds so good! Hope I'm the winner!

Gret interview ladies - MM is such a great author, I've always loved her romantic suspense books and I'm so glad she's also branched out into SF! (Sorry to be so late commenting!)