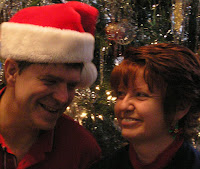 Ann Del C. Dye is a Spanish spiker that writes in English. She has four children and twelve grandchildren. Anna just happens to live in a hundred twenty one year old house in Taylorsville, Utah. She loves romance and the holidays. She has received many Awards for her books and stories she has written.

Welcome to my blog, Anna. To live in a home that is 121 years old sounds awesome. I love old homes. You usually write fantasy, so this is a new genre for you. Please tell us about your novella: The Other Santa. 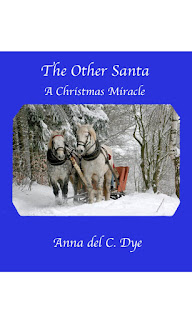 For a girl of twenty, Angieline is uncommonly wise. Perhaps losing her mother at five years old shaped her this way. Though, the presence of her forty-three-year-old tutor and the secrets they share could be closer to the truth. She and Mario, her tutor/adopted father, have been in many towns in the USA. Though their strange deeds could make them targets for unscrupulous people, they keep going even if it leads to the end to their undertakings.

When James, the reporter, appears in their lives right before Christmas, their secrets become hard to keep and their lies threaten to catch up with them. Torn between duty and love, she will have to make peace with her heart one way or the other. Though her choice could break not only her and his heart, but the heart of her tutor or the children's orphanage that desperately needs a miracle for Christmas.

Where did you get your inspiration for this story?

I’m not sure…one day I thought about the depression era and wondered how it could be if someone would go about helping the people, especially in the poorest part of the USA. That is how the story started.

I started this story about ten years ago, but got stuck and never did much with it. This year I made it my goal to finish it and publish it as a free download.

Did you have to do any research for this book?

Yes, I did look up all I could about the 1930s so I could get my facts right. Food, even entertainment. I was surprised to learn about the many known actors that were big in that era. Also it took me back to see how the poor people barely existed in that era, in contrast to some quite wealthy citizens.

Mario is a wonderful man who fell deeply in love with a woman that was taken from him just a couple of weeks before their wedding. He lost her mentally, physically, emotionally and five years later to death. In all, he didn’t become bitter, instead he adopted her little girl and raised her as his own, and the two become The Other Santa.

Where is your website and blog so my readers can check out your recent and past books that you have written?

Thank you for this fun “Christmas Season” interview, Anna. I hope my readers check out your book.
Posted by Linda Weaver Clarke at 12:00 AM

This sounds interesting. Thanks for this opportunity.I enjoy stories centered around the spirit of Christmas. jluebke(at)frontier(dot)com

Sounds pretty good and sad, too. Thanks for the interview. sonja dot nishimoto at gmail dot com

This sounds like an awesome story. I'll have to put it on my TBR list. Thanks for sharing your talents with us.

Congratulations to everyone who commented. Anna would like to give a copy of her ebook to all those who made a comment. I know you'll enjoy Anna's book.