In Anasazi Intrigue, there are stolen artifacts, the Virgin River flood, and a snoopy newspaper reporter. 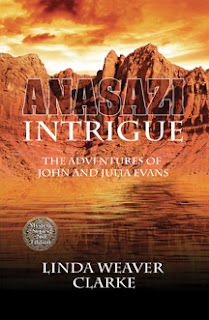 When a devastating flood wipes out homes in a small town, residents are shocked by the news of a possible poison spill that also kills many of the fish and neighbor's pets. The people don’t know what to think or do, until Julia, the town's newest reporter, jumps into action and begins her investigation. Quickly Julia realizes the story is much bigger and more dangerous than she thought. As information unfolds, Julia and her husband find themselves on the run, trying to save their lives while finishing the story of a lifetime. She never realized that being a reporter could be so dangerous. With artifacts, dead fish, a devastating flood, and miscreants, John and Julia have their hands full.

“This is the first book I’ve read by Linda Weaver Clarke and I’m already hooked,” wrote Socrates Book Review. “The first pages grab you right in and grab at your heartstrings as you read about the destruction caused by the flood. When Julia and John fight for their lives, readers will be on the edge of their seats for this one. There’s also romance in the mix. John and Julia’s marriage is strong and they are quite supportive of each other. Even when they have their ups and downs, it’s not for long and they get right back into each other’s arms. It’s nice to see a relationship portrayed this way. Very realistic and believable. This series is a “must read” for me. And...my Socrates Great Book Alert Award!”

There are two subjects discussed in this novel: The Santa Clara/Virgin River Flood and stolen artifacts. The mystery of the Anasazi Indians boggles the minds of many archaeologists. Ancient dwellings, petroglyphs, and pottery found in Utah, Colorado, Arizona, and New Mexico are fantastic and part of Anasazi history. When an ancient ruin is discovered, it doesn’t take long for thieves to take it apart. Archaeological thievery is becoming more and more of a problem every year.

The second subject brings out what really happened during the flooding in southern Utah. Lost homes can be replaced, but it’s impossible to replace precious treasures that had no value to anyone but the owner, such as photos and memories of the past. The stories of hope, charity, and little miracles seem to uplift others and have a wonderful effect on people during a crisis such as this. Clarke’s novel brings out what really happened in St George, Utah but the mystery is just beginning.

“John and Julia Evans are a married couple with grown children. It's nice to see a romantic element to a story that involves mature adults and a marriage that is not perfect, but one in which both people are committed to making it work. Add to that their grown children, a friend of the family, and a group of interesting bad guys, and you have a recipe for a great read.” –The Book Connection

My husband and I have been to Anasazi State Park.
Thanks for telling me about this book.
Janet E.
von1janet(at)gmail(dot)com