Cameron Gunn is a father, husband, and prosecutor living in Canada. A history buff and reluctant self-improver, he took on Franklin’s virtues against his better judgment. He decided to name his book: BEN & ME: From Temperance to Humility — Stumbling Through Ben Franklin’s Thirteen Virtues, One Unvirtuous Day at a Time.

“Benjamin Franklin would adore this book! He’d chuckle and nod all the way through. Like Franklin’s Autobiography, this is an insightful self-improvement guide wrapped in a delightful tale.” (Walter Isaacson, author of Benjamin Franklin: An American Life)

Hello Cameron. This book is a “heartfelt, funny, and fascinating diary” of your journey to self-improvement by using the 13 virtues of Ben Franklin. Please tell us about your new book. 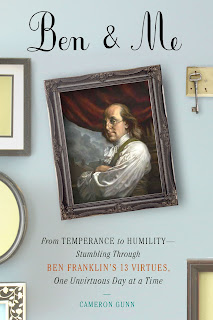 Hi Linda. Thanks for the interview. I like to think of BEN & ME as a humorous journal of failure or a self-improvement guide for people who don’t want to improve.

It came out of what I describe in the book the Triple T syndrome. First, my hair is Thinning (that’s T No. 1). As my hair goes I am reminded that my time on earth is finite. Second, I am Thickening. As I age I am not the man I once was (or maybe I am more of the man I once was). Finally, I am a Thirster. Despite the first two T’s (or maybe because of them) I still have the desire to be a better person (I think we all have it). It was this last T that led me to Ben Franklin and his 13 virtues.

When Franklin was a young man he developed a course of virtues to make him a better person. He would concentrate on a virtue for a week, trying to master it, before moving on through all of the 13 virtues. I decided to use the 13 virtues in my own quest and, despite Franklin’s success with the course, I failed on a number of levels. I don’t think doing the course made me a better person, but I hope it makes for some funny reading.

I understand that you decided to tackle all 13 virtues: temperance, silence, order, resolution, frugality, industry, sincerity, justice, moderation, cleanliness, tranquility, chastity, and humility. How did you accomplish this?

First, I read as much as I could about Franklin and his virtues. Next, I copied the book of progress that he had used to track his failures and successes and finally, I recruited an ethicist, Chris Levan, to provide me with a modern explanation of each of the virtues. I used this to guide me through the course and I tried, as best I could as a citizen of the twenty first century, to emulate Franklin’s very eighteenth century virtues.

One thing I attempted to do was to make my journey through the virtues relevant and replicable for a modern, average, ordinary person. For example, in Silence I tried to avoid office gossip (I didn’t last a morning), for Chastity I tried to be a better husband (my wife didn’t notice any difference) and for Industry I cut my TV viewing to an hour a day (I was banished to the basement). Unfortunately, even these small attempts at improvement seemed too much for me.

What was the hardest virtue to accomplish and why?

They all had their moments but I think that the clear winner was Temperance. My biggest vice is overeating (my wife says that I am a stress eater, but the truth is that I eat whether I am stressed or not), my nickname in Junior High school was “Fat Chance” and my kids used to call me the “Big Fat Teddy Bear”. I knew that Temperance was going to be difficult.

I decided that I would try to avoid snacking and to adopt a healthier eating style for the week. Unfortunately, I had a difficult time overcoming my love of food. I was like a drug addict going through withdrawals for the entire seven days. Eventually I fell prey to the siren call of some high fat cheese and late night snacking. It was probably a good virtue with which to start since there was nowhere to go but up.

What did your wife think about the change in your life?

She was skeptical at first. I had begun the course with a survey of some friends and family and when I interviewed Michelle about how I ranked on Franklin’s virtues, I ended with a silly question: “If I were an animal, what would I be?”

She refused to participate in the exercise (she made it clear from the beginning that this was not a couples activity) and as I progressed through the virtues, she regarded my efforts with some well-considered suspicion (not to mention banishing me to the basement for a brief period of time).

When the course was over, I interviewed her again to see if she noticed any difference in me. After I went through the virtue rating, I repeated my animal question.

“Still a sloth,” she answered.

This time, however, she explained that she thought of my being a sloth as a positive. She envisioned a sloth as happy, satisfied and taking life one day at a time. I learned to live with being thought of as a sloth.


This interview is so hilarious. I laughed all the way through it. Okay, now it’s time to tell us something about the real you that we’ll never forget.

I am like a less successful Forrest Gump. I’ve had a number of near misses with history. When I was nine years old I was arms length from Queen Elizabeth the Second during her tour of Canada and I shouted to one of her bodyguards to ask her to turn so I could take a picture. Remarkably she did. Unfortunately, she turned the wrong way and I now have a grainy photo of the back of her head.

In 1989, I was backpacking around Europe and while my cousin and I were on a train in (West) Germany we heard a news report that the Berlin Wall was going to fall. We discussed going but decided that it wasn’t that big of a deal and there was no reason to pay the extra price for a train ticket to Berlin. Years later my wife gave me a piece of the Wall she obtained from a friend of ours who had also been in Germany at the time and was slightly more historically attuned than I.

Earlier, on that same trip my cousin and I decided to visit the Vatican. As we entered St. Peter’s Square, the number of visitors astounded us. When I saw, over the thousands of heads, the very tip of someone’s miter moving across the steps of St. Peter’s Basilica I thought we might have just missed some sort of Papal address. Only later did I realize we had indeed missed “some sort of address”: the canonization of two Italian men by Pope John Paul the Second in front of a crowd of 30,000 people.


Wow! What wonderful stories! Well, it seems that you missed two great historical events and the queen’s photo. If you would have only known the importance of the other two events… Oh man! You were sooooo close, too. Now we know the real you: Forest Gump and "sloth" rolled into one! Thanks for this fun interview, Cameron.
Posted by Linda Weaver Clarke at 1:00 AM

I laughed at Cameron's description of the book as 'self-improvement guide for people who don’t want to improve' and at his wife's description of HIM as a sloth! :) I always thought sloths had the right idea anyway, they appear to consider every move very carefully.

This book would be perfect for my Husband! LOL

Thanks for the giveaway. I'd love to win a copy!!!

What fun this talented writer is. Cameron's descriptions are very funny and I would guess his book about Ben and Me is equally as pleasureful as Cameron. I really would like to read his book. Thanks for this giveaway and the chance to win this entertaining book. I hope I win!

thanks for this giveaway!!!...I'm actually not a fan of this kind of books but hen I wanted to try and learn more, and surely by reading this book it will be a start..;)

maryanngacayan@yahoo.com
I hope I'll get this copy!!
(international)

thanks for the giveaway.

I Love the Triple T Syndrome! Please include me!

It's great to see a Canadian author on a book blog.

If this book is as amusing as the interview it'll be great! Sounds like Cameron Gunn got the humility part down pat. I love Ben Franklin - he and I share the same birthday, though quite a few years apart.
Thanks for a great interview!
Jen
jryder416 at yahoo dot com

I love the idea behind this book and sure would love to be able to get a chance to win this book. Thanks for offering this chance. susan Leech garysue@dejazzd.com

Sounds like an amazing book ... I hope that I'm not to late for the giveaway. This book is something that I would love to read! We all have room for improvement in our lives. and my husband is a sloth too lol
jenkinsdefreitas@gmail.com

Congratulations, Vanessa! You're the winner of Cameron's new book. I know you'll enjoy it very much. Have a great week!