Research is Fun and Educational When Writing a Novel

Writing Historical Fiction is such fun. If you do good research, it helps you to understand how the people of that century lived. Even if the country or area is fictional, you need to do research. When writing historical fiction, research is imperative so the story is believable. I wanted to write a series that had mystery, adventure, and romance set during the late 1700s. Even though I created a small country that had its own problems, I needed to research that era.

As I developed The Rebel Series, I wanted the time period to be authentic, so I researched the type of clothing that was popular during the late 1700s. But that was not all. How did the people live during this time? Did they have a stove? What type of lanterns did they use? Oil or gas?

I love a rogue who fights for justice. It was a bunch of rebels who fought for their freedom during the American Revolution. Robin Hood and his rebels fought against the injustice of a wicked king. Liberty is something that I dearly cherish. As I pondered what kind of story I wanted to write, I decided upon a small country that struggles to be free. The people finally refuse to be ruled by a monarchy any longer. In this Period Romance, The Rebels of Cordovia, I decided to have a strong woman character who happens to be the leader of a rebel group. This book has clean romance for both young and old alike.

As I wrote the second book in The Rebel Series, I found there were several women journalists in history. Since my heroine in The Highwayman of Cordovia was a journalist, I needed to research the subject. In France, Anne-Marguerite Petit du Noyer (1663-1719) was the most famous female journalist. In fact, her articles were read all over Europe. She wrote about the negotiations that led up to a series of peace treaties and she also reported on scandal and gossip.

In this same story, I wanted to have a ball. What dances were popular in the late 1700s? When I did some research about the “waltz,” I was surprised at what I found. The peasants were the first to dance the waltz. It was such fun that bored noblemen would sneak out and go to the country-dances. The Oxford English Dictionary back then called the waltz “riotous and indecent.”

In a 1771 German novel, someone complains about the “newly-introduced waltz” among the aristocrats. He wrote: “When he put his arm around her, pressed her to his breast, cavorted with her in the shameless, indecent whirling-dance of the Germans and engaged in a familiarity that broke all the bounds of good breeding—then my silent misery turned into burning rage.” I was so intrigued by this description. The waltz finally became fashionable when the wife of a Russian ambassador endorsed it.

As I wrote the third book, The Fox of Cordovia, I discovered some interesting facts about lamplighters. They were a faithful lot, lighting the lamps every evening at dusk. Many a young man applied for the job because it suited their schedule, but the city was careful whom they hired because lamplighters also acted as night watchmen and needed to be trustworthy. In fact, the job was usually handed down from father to son and kept within the family.

During the American Revolution, there was a man known as the Swamp Fox and he influenced my story quite a bit. His tales were ones of courage and valor, so I named this novel after the Swamp Fox. In The Fox of Cordovia, I found that it was common practice for the king’s ranking officer to kick a family out of their home so he could house his soldiers and officers. No one had a say. No wonder the patriots decided to fight for their rights. They had had enough! 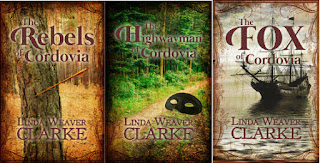 The inspiration for this series came from the stories of the patriots. Each book in The Rebel Series has its own plot, but the story continues on, giving a satisfying ending to this trilogy. This series has become so “well loved” that I finally had a narrator narrate all three books for Audible. Below is a sample of each audiobook.