Sarah Dunster is wife to one, mother to seven, and an author of fiction and poetry. Her poems have appeared on the online LDS poetry blog Wilderness Interface Zone as well as in Victorian Violet Press, Segullah Magazine, Dialogue: Journal of Mormon Thought, Psaltery and Lyre and Sunstone Magazine. She has published two novels with Cedar Fort under their Bonneville Books imprint: the award winning historical fiction novel Lightning Tree, and Mile 21, which is a contemporary fiction/romance novel. When she is not writing Sarah can often be found cleaning, cooking vegetarian or international meals, holding small people in her lap, driving kids to soccer and piano lessons, singing in local musical productions with her family or taking long walks after dark, especially in thunderstorms.

Welcome back to my blog, Sarah. Please tell us about Lightning Tree. 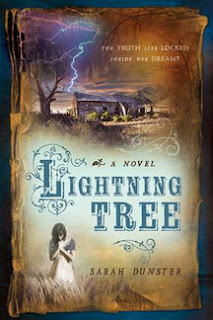 It’s a mystery-pioneer-history story, set in Utah in 1858 just after the Utah War ended. Maggie, my main character, is an orphan whose parents died on the pioneer trail, and she and her sister have been adopted/taken in by a family and they all now live in Provo. The book opens as she discovers something troubling that leads her to believe her foster family might be keeping some terrible secrets from her.

What genre is this novel and where did you get your inspiration for it?

Historical Fiction, Y/A.  I just love history, and so to write about it means I get to do a whole lot of research for a good reason. But also I’m fascinated by Mormon Immigration stories. This girl is from Italy, and she was part of a French/Italian Christian sect that was persecuted for centuries by the Catholic Church. They were called Vaudois, or the Waldensians. Lorenzo Snow and Thomas B. Stenhouse converted several Vaudois families in 1854, and when those families started being persecuted by their neighbors, they immigrated to the United States and to Utah. They are very special people.

What kind of research did you do for this book?

Oh, I’d say I do a couple hours of research for every hour of writing. I know that sounds like a bit much, but I love research so much, why not? Why not get every detail right, you know?  And I hope it creates a real feel for the time, the people, the town, the way life was back then. I have deep sympathy for readers who love to immerse themselves in another time. And I’ve always loved the books that provide me with an incentive to do some research of my own, like… did that really happen? Was that place real? Etc. So that’s what I wanted to write.

I think it’s interesting when authors add real life situations to their stories. Did you put real experiences in this book?

In a way, yes. The story at the beginning of the book, where Maggie discovers the surprise that leads to her doubting her foster family, is straight from my own family history. I have a relative who ran away at 15 years old because of what he found. And it’s a bit of a heart-wrenching family history story, but his story (like Maggie’s) turns out happy in the end.

Thanks, Sarah, for this great interview. I appreciate all the hard work that you have put into this book. I hope it touches many lives.

Jill Ammon Vanderwood is an author and speaker from Utah. She is best known for her award winning, nonfiction books, What’s It Like, Living Green? Kids Teaching Kids, by the Way They Live and Drugs Make You Un-Smarter, co-authored with her teenage granddaughter, Savanna Peterson. This book was the winner of the Mom’s Choice Award. Jill is an active fundraiser, taking on environmental and literacy causes. Along with her husband, who is a professional Santa Claus. Jill, as Mrs. Claus, visits with hundreds of children during the Christmas season.

Welcome back to my blog, Jill. You have a very interesting book here. Please tell us about it. 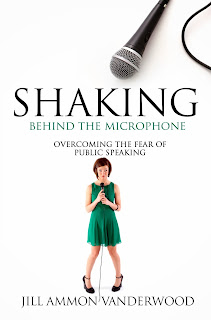 Wow! You really researched this subject, didn’t you! Where did you get your inspiration for this book?

I have suffered from the fear of public speaking since elementary school. It wasn’t until I was a grandmother that I started writing books. As a member of the League of Utah Writers, I would enter my stories in contests and then say over and over, “Please don’t win!” Because I knew that if I won I would have to get up and read my piece in front of a group.

In Shaking Behind the Microphone I tell about my struggles in dealing with the fear of public speaking and the path I took to overcome this fear, which had held me back most of my life. I now teach workshops for the League of Utah Writers, speak at schools, including assemblies, Boys and Girls Clubs, drug rehabs, church groups and many more. I have been on TV, and many radio shows and newspaper interviews.

One of the first things I decided was to never turn down an opportunity to speak. I volunteered to teach my first workshop and then I panicked and joined Toastmasters. I had six months to learn to speak in front of a group. I also contribute much of my success to what I call my “Leap for Literacy.” I went skydiving from 12000 feet to raise funds for the Literacy Action Center in Salt Lake City. After that, I could always say to myself, “You’re not afraid of these people. You went skydiving.”

Although, I’m not recommending skydiving or any other risky behavior to anyone, I think facing something else you are afraid of will certainly help you face your fear of public speaking. Go to the top of a tall building and look down. Hold a snake or let a tarantula crawl up your arm. Any of these should do the trick.

Wow! Jumping out of a plane sounds like it would do the trick. What kind of research did you do?

I think it’s interesting when authors add real life situations to their stories. Who were the contributors of your book?

The stories are from a law student; a woman who’s first speaking experience was at TED Global; Rabbi Manis Friedman; several businessmen including Baron Canon, who swore he’d never take a job which required public speaking; Rocky Finseth, a lobbyist for Carrera Nevada whose job was in jeopardy unless he learned to speak in public: Dan Nainan decided to take a comedy class to help overcome the stage freight he experienced while doing product demonstrations onstage for Intel Corporation. He did so well as a standup comedian that he left his job. He has since performed comedy for President Obama and Donald Trump. We have advice from four-time Emmy Award winning news anchor, Jan Fox who has interviewed four presidents. She started her own business as a public speaking coach. We even have a story from SAG nominated actor and producer, David Barckhoff. Each time I would finish an interview, I would say, “This one is my favorite.”

Wow! I think this book is a must for authors who hate public speaking. Thanks, Jill, for an awesome interview.

Posted by Linda Weaver Clarke at 1:00 AM 9 comments: