A lifelong Mississippian, Annie Oeth is a graduate of Mississippi University for Women. She currently works as a features editor for The Clarion-Ledger, the state’s largest daily newspaper. She writes about family and fun and The Mom Zone blog. Annie is the author of Because I Said So: Life in The Mom Zone, which was published in April 2014. She is a solo mom to four, and currently resides in Ridgeland, Mississippi. Connect with Annie on Facebook and Twitter.

“Whether you’re a mama to sons who have an affection for reptiles and bottle rockets or a daughter who thinks you’re wrong… just when you’ve figured out your own mother was right, you’ll love yourself, your kids and your life more after this read. Why? Because I said so.”

Hello, Annie. This is such a classic statement. All of us mother have said, “Because I said so.” Please tell us about your book. What is it about? 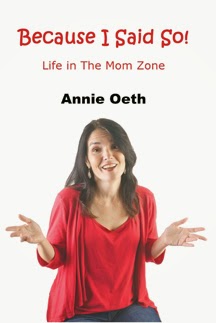 Hello, Linda, and thank you for including me and "Because I Said So: Life in The Mom Zone" in your blog! And yes, I have also said, "Because I said so," many times. The book is about life in general and being a mom in particular. There are some laughs, but also some tears, in these pages. There are some stories about growing up and being a grown-up. I think parents will identify with it, but I also think there are things readers would identify with because they are part of the human experience.

What was your inspiration for this book?

The inspiration for the book comes from knowing and working with mothers, swapping stories and my own four children. I think we've all had moments when we loved a memory or a story so much we just had to write it down. These are some of the ones that were written down.

Are these your own experiences or from talking to other parents, or both?

In "Because I Said So," I drew mostly from my own experiences, although there are a cast of characters involved, but talking with others raising children also provided inspiration. They inspire me every day. Being a mom or a dad is not easy.

Will you please share with us one of the funniest things you inserted in this book?

There are quite a few of them that make me laugh, from my boys putting frogs in mailboxes to kids putting two and two together about Santa Claus. I also had to laugh about our preacher asking if I needed help with the housework (nothing is more mortifying) and about being asked by my son, after I brought home third place in my age group in a 5K, if there were only three people in my age group. If I wasn't a mom, I would have to pay for entertainment.

One of the most difficult times in my life was the time from 2004 to 2006, when I lost my mother to a stroke, then my husband, and five months later my father, both to heart attacks. Coming back from that was hard, but I had to. There were four children depending on me. Raising my children is a great joy to me, but keeping my family strong and connected is, for lack of a better word, my mission in life. It's for this reason that I treasure all kinds of memories.

Wow! You have had some real challenges in life. Thank you for this wonderful interview, Annie. I’m sure my readers will enjoy this fun filled book. Below is an excerpt for all of you to read. Happy reading!

There was a time of retribution like no other in my growing-up years. It was when church let out.
Church misbehavior would get you a warm behind faster than setting fire to the school back then. It was a reflection on your parents‘ child-rearing in the public-est place in town. You didn’t challenge authority too much more than acting like a heathen in church. It was like asking for the physical motivation to stand awhile.
We would witness someone wearing out their young’uns‘ backsides beside the family‘s Chevy Malibu and be thankful that our own badness, doodling, whispering and note-passing didn’t cross the line that Sunday.
Our badness continued, though, not unlike a game of Russian roulette. We’d keep talking during the preacher’s sermon, never knowing when the bullet of getting a backseat beating had our names on it.
Of course, we all grew up, and many of us kept the habit of going to church. We had even learned to behave by the time we had children of our own. And this is when I learned the lesson my parents and all my friends‘ parents knew: Never commence to punishing your child during the sermon.
The oldest boy was somewhere between two and three at the time and was bored out of his little mind. To occupy his time, he picked up the Methodist hymnal and began flipping all gazillion pages from hard front cover to hard back cover.
Whap.
Whap.
Whap.
“Stop, baby,’’ I hissed.
Whap.
Whap.
Whap.
It was like the tide, steady and relentless, and also pretty darned loud. I started getting disapproving looks from my fellow congregants.
Whap.
Whap.
Whap.
In desperation, I folded my arms and gave him a pinch, surreptitiously, to get his attention.
Instead, he got mine. Along with the preacher’s and everyone else in the congregation that day.
“Mama!’’ he said in a nice, clear, outside voice. “Quit pinching me!’’
The preacher had to pause to get his composure back, shaking while he stifled a laugh, and the choir twittered with muffled laughter until the altar call.
The rest of the week, folks around town would tell me to stop pinching my little boy and laugh. That was the last time he got pinched by me, in church or elsewhere, by the way.
The oldest boy was lucky he was a child of his generation. In the church parking lots of my day, that would have gotten him a walloping of Biblical proportions.
Posted by Linda Weaver Clarke at 1:00 AM 6 comments: