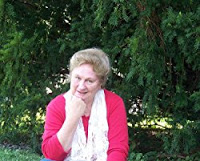 About Carol: Besides being a member and active participant of many writing groups, Carole Brown enjoys mentoring beginning writers. An author of ten books, she loves to weave suspense and tough topics into her books, along with a touch of romance and whimsy, and is always on the lookout for outstanding titles and catchy ideas. She and her husband reside in SE Ohio but have ministered and counseled nationally and internationally. She has found that the traveling and ministering has served her well in writing her novels. Together, they enjoy their grandsons, traveling, gardening, good food, the simple life, and did she mention their grandsons?

About writing the book: 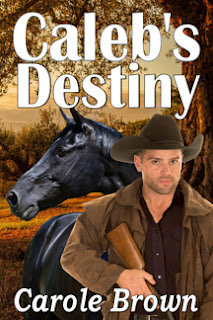 This is book one of the Troubles in the West series. I write Romantic Suspense/Mystery in contemporary and historical, but it's the first time I've written in historical western. Set in the mid to late 1800s, it was a new adventure to me, but a fun one. I'd started it a few years ago thinking I might enter it into a contest, but never finished it then. My husband had given me the idea of the book, so I'd kept it hoping someday to finish it.

Last year was a hard year for me with little writing, but when 2020 came, inspiration came back and I was determined to finish this book, and finish it I did in a little over two and a half months. It's a book about wrongs from the past that children must make right… and in doing that, forgivenness and trust comes into play.

Description of Caleb’s Destiny:
Mr. Michael, Destiny Rose McCulloch, and Hunter have a mysterious history. Why were three fathers, all business partners, murdered under suspicious circumstances while on their quest to find gold? Hunter, who is Mr. Michael's ranch manager, is determined to find the answers and protect the precocious young lady who he suspects holds a key answer to his questions. Mr. Michael wants only to be left alone to attend to his property, but what can he do when Destiny refuses to leave and captures the heart of everyone of his employees? Destiny almost forgets her quest when she falls in love with Mr. Michael's ranch and all the people there. And then Mr. Michael is much too alluring to ignore. The preacher man back east where she took her schooling tried to claim her heart, but the longer she stays the less she can remember him. She only came west to find a little boy she knew years ago. A little boy all grown up by now...unless, of course, he's dead.

After he settled into a seat across from her, he picked up his fork and looked at her. “Dig in.”
She hated it, but her cheeks were heating up again. “Do you mind...?”
“Mind?” His first bite headed toward his mouth. “If you eat?”
Why hadn’t she just said a silent, quick prayer? “Uh, I’d like to say a prayer. I've grown used to doing it at sch—uh, home.” And Richard had always insisted on it.
He dropped his fork. “Of course. Go ahead.”
Closing her eyes, she pressed her hands together. “Heavenly Father, we ask for your beautiful—I mean, bountiful blessings on our snack—breakfast, uh, tonight.” Destiny wanted to sink through the floor. She, who was the epitome of gracefulness at school; she who wanted to impress this confident man, was stumbling like a drunken cowboy. Whispering a “Father, forgive me” for butchering what should have been a simple prayer, she hastened to finish it. “Thank you for Mr. Michael’s hospitality, and help us to further our friendship.”
Ugh. He’d think she wanted something more than friendship. Destiny cringed and refused to glance at him. “Amen.”
Had that been a snicker? Surely not. She picked up her fork and shoved a tiny bite of egg in her dry mouth. She chewed and swallowed, but the former delicious-looking omelet refused to go down. She reached for her coffee and felt the food slide down with the coffee.
Ah, reprieved.
“Tell me, Miss McCulloch—it is Miss?”
He was laughing. She could hear it in his voice without even seeing his face. Her appetite vanished just as her temper kicked in. “It is Miss McCulloch to you, Mr. Michael, and I’ll thank you not to laugh at me.”
“I wouldn’t dream of it.” And this time his voice was serious.